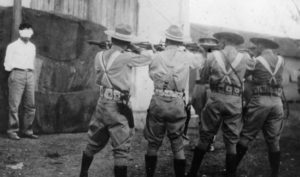 J.W. Ledford, Jr. was convicted of murder, kidnapping and armed robbery in Murray County, Georgia in 1993.  Since that time he has been incarcerated and now waits for his execution on death row.  He is to be executed this Tuesday, May 16, 2017, but has an unusual request – he wants to be executed by firing squad.

Ledford claims that an execution by firing squad would be more certain and less painful than one by lethal injection.  He currently takes a regular prescription of gabapentin and his lawyers have evidence that it has changed his brain chemistry so drastically that an injection of pentobarbital would not render him unconscious.  Therefore, he prefers death by firing squad.  The Georgia Atty. General’s office opposes his request saying that there is no proof that a firing squad would be less painful than lethal injection and also no proof that lethal injection is painful at all.  The law allows him to select an alternative form of execution as long as it is approved by the State.  The problem is that legal injection is the only form of execution that has been approved in Georgia.

Mississippi Oklahoma and Utah all permit execution by firing squad although each of them use lethal injection primarily.  Utah used a firing squad as recently as 2010.  There, five shooters armed with .30 Winchester rifles performed the execution although one of the rifles was armed only with blanks.  The inmate was seated and blindfolded and surrounded by sandbags to prevent ricochets.

Ledford’s lawyers contend that there is very little that can go wrong in this type of execution.  Contrarily, death row inmates nationwide have  challenged the constitutionality of using midazolam, the most common lethal injection drug.  They claim that the drug is not reliable and can lead to extraordinary pain and convulsions.  In fact, spasms and convulsions have been observed in several executions.  Witnessing death: AP reporters describe problem executions